Will Davison’s back to basics approach

Will Davison’s back to basics approach Toll HRT's Will Davison at Queensland Raceway two weeks ago

Toll Holden Racing Team’s Will Davison is taking a ‘back to basics’ approach at this weekend’s Winton V8 Supercar event.

Davison is languishing in 14th place in the championship, a position that frustrates him given his impressive debut year with HRT in 2009 and his team-mate’s fine form.

“Things haven’t been working out our way this year so far, that’s no secret,” said Davison.

“We just haven’t been able to get the car working as it did last year. So that’s why we’re going to go back to basics this weekend and look for some consistency. 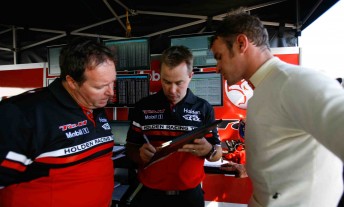 “Queensland was the most disappointing event I can remember in a long time. But both the team and I are more motivated than ever to get back up to the front.

On the opposite side of the form spectrum, Garth Tander is not only showing up his young team mate but is showing the rest of the field how it is done.

The 2007 V8 Supercar champion has been the top-scoring driver in the championship since it returned from the Middle East, collecting a haul of 825 points to shoot him from 22nd to fourth in the point score.

In that time he’s more than halved the margin to series leader Jamie Whincup, slashing it from 453 to 219 points.

“Based on that progress, we’re actually a little bit ahead of schedule,” says Tander.

“We had to fight back from those results in the Middle East and I think we’re doing that. We’ve basically halved the gap in three race meetings. But anything can happen and Queensland proved that with Jamie’s retirement on the Sunday. It can turn very quickly.

“But we’ve got plenty of time to catch up. We don’t need to be there just yet.”