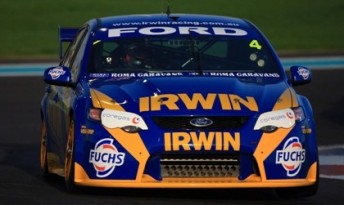 Stone Brothers Racing is going back to the drawing board in an attempt to see its entire V8 Supercar fleet racing at the pointy end of the field.

Identical cars will be given to IRWIN Racing’s Alex Davison and his Stone Brothers Racing team-mates Shane Van Gisbergen and Tim Slade at Winton tomorrow (Friday) as the team looks to improve race results across the board.

Van Gisbergen has had an impressive start to the season with four podiums and sits third in the championship while Slade and Davison, who have generally struggled for speed and consistency, are placed 20th and 22nd respectively.

Stone Brothers Racing wants to closely monitor all three cars to see how each performs with a matching race set-up.

“The overall team results so far this season have been disappointing so all three cars hit the track on Friday with identical set-ups,” said Ross Stone.

“The three cars have drifted apart due to driver (set-up) preference.
“The aim is to have one starting point and any changes from there on are going to be closely analysed.”

Alex Davison believes the strategy will be good for IRWIN Racing.

“It makes a lot of sense, the cars were fairly similar at the start of the year and we’ve gone in slightly different directions, to go back to where we started is very logical,” Davison said.

“It’s not the first time that we’ve all started with the same set-up, but it comes back to the fact that car nine has been going really well so far this year and we haven’t been able to achieve the same results.

“I have a different brake pad package, with everyone using the same set-up we can truly see where we are at.

“If it works then it’ll definitely be a good exercise.”

Races 11 and 12 of the 2010 V8 Supercar Championship kicks off at Winton tomorrow with four 30-minute practice sessions.