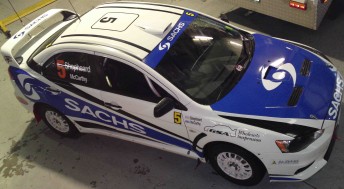 Steven Shepheard has picked up a new title sponsor ahead of this weekend’s Coffs Coast Rally.

The Mitsubishi Lancer Evo 10 will feature branding from international automotive parts supplier SACHS for the remaining rounds of the season.

SACHS is the world’s largest manufacturer of shock absorbers, with the team now known as the SACHS Rally Team.

“It’s fantastic to have a SACHS on board for the Australian Rally Championship, it’s a great vote of confidence in the team and the Australian rallying scene as a whole,” Shepheard said, who currently runs in sixth position in the championship standings with co-driver John McCarthy.

“We made a big commitment this year to compete in the whole championship, which started with two long haul events in Tasmania and Western Australia, so that was totally justified.

“We’re really pumped up for strong results this year, and I’m sure all going to plan, we will have a very long and successful relationship with SACHS.

“Coffs Harbour this weekend is shaping up perfectly, the car has come together really well, we just can’t wait to get started.”

The Coffs Coast Rally kicks off on Friday, with the northern New South Wales event running through to Sunday, including Super Special stages on Friday and Saturday evening around the Coffs Harbour Showgrounds.