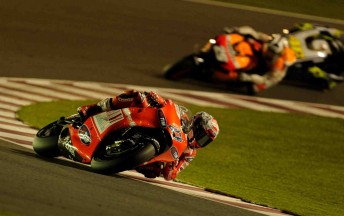 Former MotoGP champion Casey Stoner has been linked to a manufacturer switch next year.

The Australian rider’s management has been in talks with Honda about a possible switch from his current home at Ducati – the maker that he won the 2008 title with.

According to Australian Associated Press, Honda Racing Corporation’s marketing manager Livio Suppo held talks with Stoner’s manager and father Colin during the Spanish Grand Prix in Jerez last week. However, Suppo denied a report on an Italian website that the 2007 world champion was joining the Japanese manufacturer.

“There are four great riders whose contracts are ending,” Suppo told GPOne.com.

“And it’s clear that there will be interest in at least one of them. But at this moment, everyone is talking to everyone, but no one has signed anything.”