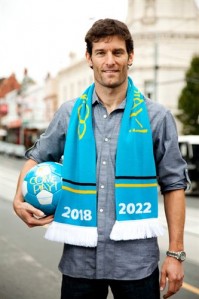 Coming off the back of his victory in the Spanish Grand Prix, Red Bull Racing driver Mark Webber is supporting the bid for a win of a different kind.

Webber is an official ambassador for Australia’s bid to host the FIFA World Cup in 2018 or 2022.

With the 2010 World Cup just 30 days away, Webber has thrown his support behind his home country’s ploy to secure what is arguably the world’s biggest sporting show.

“The race to bring the FIFA World Cup to Australia is on,” said Webber.

“Like Formula One driving you need belief, passion and Aussie grit to be successful. As a proud Australian, I am delighted to support our nation’s bid to bring the FIFA World Cup to Australia in 2018 or 2022.”

The FIFA Executive Committee will make a decision on the hosts for the FIFA World Cup in 2018 and 2022 in December this year at FIFA Headquarters in Zurich, Switzerland.