Perkins confirms another Fujitsu round

Perkins confirms another Fujitsu round 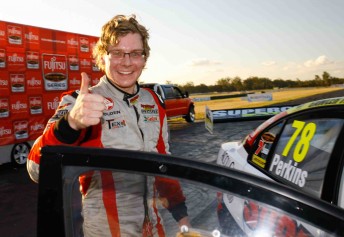 Jack Perkins has confirmed he will return to the Fujitsu V8 Series field this weekend for the third round of the development series at Winton Motor Raceway.

Perkins will join the biggest Fujitsu field of the year, with 27 entries listed to start (see below for full entry list).

Perkins will drive the James Rosenberg-owned Commodore VE that he steered to victory in the last race at Queensland Raceway recently. He will continue to enjoy sponsorship from Supercheap Auto and Accu-Chek, and is being assisted by Aussie Racing Car entrant Mark Griffith, who will transport Perkins’ VE to the rural race track.

He told Speedcafe.com.au that with his home-ground advantage, he has a great chance to further improve on his QR result.

“I’m stoked to be having another run,” he said.

“Having such a good result at Queensland helped. If there was one track i thought I’d struggle at, it was Queensland Raceway, but now that I’m confident with the machinery, and obviously I’ve done plenty of laps around Winton, I think we can do good things.”

Perkins says that he’s like to complete the remaining rounds of the Fujitsu Series, but he is stuck on his ‘race-by-race’ deal.

“That would be my plan, but I can only take small steps. James Rosenberg owns the car and I rent it off him. While we don’t put any marks on the car and have no major failures, it makes it easier and possible for us.”

Other new entries include Cameron McConville, who will steer an ex-Walkinshaw Racing Commodore VE, backed by JAX Quickfit Tyres. The Ben Eggleston-owned car is entered under #38. Eggleston himself will also compete in his first race of the 2010 season, using his VY-model Commodore (under new Fujitsu rules which allow older models to enter).

Owen Kelly returns for Kelly Racing’s Metaland-backed Commodore after a mixed return at Queensland Raceway. The Jack Daniel’s Racing endurance driver was involved in a start-line incident with debutant Scott McLaughlin in Race 2 but fought back from the tail of the field to finish fifth in the final race.