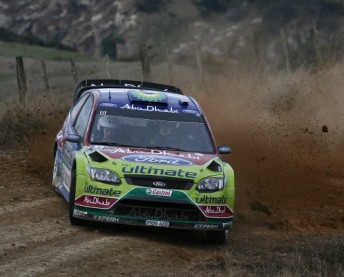 After remarkable drama in the final few kilometres, the Finn won by just 2.4sec in his Ford Focus RS World Rally Car from Citroen Junior driver Sébastien Ogier; the third closest finish ever.

Latvala’s victory was his third career success and his first since triumphing in Italy almost 12 months ago. The victory means Ford overtakes Fiat/Lancia as the most successful manufacturer in the history of the WRC with 75 wins.

The 25-year-old Finn was frustrated after losing time yesterday and started the final day in third, 33.2sec from the lead but in a better start position than those ahead.  He climbed a place on the second of the four speed tests on the Tasman Sea coastline near Raglan and went into the final stage, the legendary 29.67km Whaanga Coast, just 6.2sec from the lead.

Four drivers started with a chance of victory.  Petter Solberg was the first to fall by the wayside when he crashed into a telegraph pole and then Sébastien Loeb (Citroen Total) spun less than 10-kilometres from the finish.  Incredibly leader Ogier then went off the road just three corners from the finish.  Amid all the drama, the consistent Latvala kept calm to power to a fairytale victory.

“I didn’t think it could happen, it’s the most amazing and beautiful win,” said Latvala.

“Whaanga Coast showed its teeth.  I neared the end of the stage and could see a car’s bumper on the road but I didn’t know which car it was from.

“I didn’t know we had won until three minutes after the finish of the stage and my co-driver Miikka (Anttila) did the calculations.  It’s my best win and makes up for my disappointments.

“I can’t believe I’m second in the championship.  I wasn’t the fastest here but I was the most consistent and that paid off when it mattered.  I need to carry on doing the job I’m doing as second driver because my strategy is working.”

Team-mate Mikko Hirvonen finished fourth in another Focus RS WRC, to enable Ford to close to within five points of the lead in the manufacturers’ championship standings with eight rounds remaining.

Defending World Rally Champion Sebastien Loeb took the lead in the rally after the day’s opening stage. However, he lost just under 50 seconds when he slid off the road during the first run on the Whaanga Coast stage.

“It was a long right-hander about three kilometres from the end. There was more gravel than I expected and the car started to understeer and I could not stop.

“We have had some very good moments on this rally and some very bad ones. This is one of the bad ones.”

The opening half of the WRC season ends on gravel with the Rally de Portugal.  It is based in Faro on the Algarve coast on 27 – 30 May.

Check out the final day of Rally NZ tonight on ONE-HD from 8.30pm.