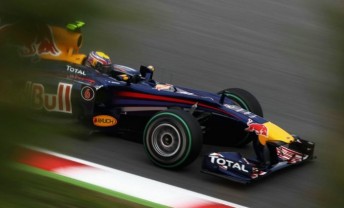 Australian Mark Webber beat his team-mate to pole in Spain

In a close session, Webber grabbed the top spot by 0.106s over Vettel – and the rest of the field was a long way behind.

McLaren’s Lewis Hamilton will start the Spanish Grand Prix from third spot, over 0.8s behind the runaway Red Bull pair.

In fact, it was a great qualifying session for Sauber, with Kobayashi’s team-mate Pedro del la Rosa in 12th place – the team’s best combined qualifying result.

Force India was one of the disappointments of the first two sessions. Adrian Sutil and Vitantonio Luizzi both missing out on a chance in the top 10 session.