Treseder to start on pole in Ipswich

Treseder to start on pole in Ipswich 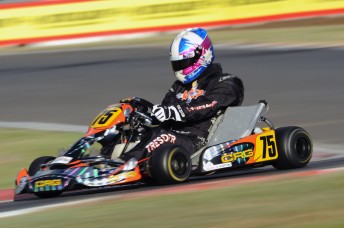 Kel Treseder will start from pole position for the opening final of Pro Gearbox in Ipsiwch tomorrow. Pic: photowagon.com.au

Kel Treseder has earned the right of start on pole position for the first final in the Pro Gearbox (KZ2) category in Round Two of the CIK Stars of Karting Series in Ipswich, Queensland tomorrow.

The Bundaberg driver showed impressive speed aboard his Kel’s Karts and Parts CRG kart to claim provisional pole during qualifying this morning before finishing second behind Troy Woolston in the top five shootout.

Treseder went on to record a win, second and third across the three 15-lap heat races to secure the pole position for tomorrow’s opening final.

“So far everything is looking good, being fastest in qualifying was a good feeling and after a few solid results during the heat races I’m really looking forward to tomorrow,” said Tresder.

“I’m using an IAME engine for the first time this weekend and so far everything is going to plan. We’ll make a couple of minor changes overnight to accommodate for the longer races tomorrow.”

In the Pro Light (KF1) category it is round one winner Cian Fothergill who is looking strong. Fothergill’s Tracksa Racing team-mate John Grother qualified on pole position, the third of his CIK Stars of Karting career, ahead of Fothergill and McBride. Fothergill finished up on top during heat one before McBride turned the tables in the second 15-lap encounter.

Unfortunately for McBride, the defending series champion, his run in heat three came to a premature end on lap three. Grother inherited the lead but was chased down by Fothergill over the closing stages, who went on to win his second heat of the day. Grother was later disqualified for being underweight.

It is a State of Origin battle in the Pro Junior (KF3) category with the likes of New South Wales youngsters Pierce Lehane and Jonathan Venter, Queenslanders Aiden Wright and Brock Plumb along with West Australian Jake Klarich battling for the front running.

The opening heat was a hard fought affair before Wright claimed the win in his Tony Kart ahead of Plumb’s Birel and Lehane in his CRG machine, who fought back to win the final two heat races of the day.