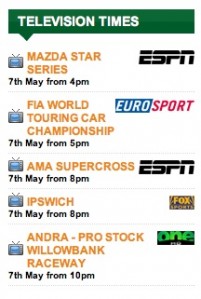 Speedcafe.com.au viewers can’t ever say they have nothing to watch on television – because there’s plenty of motorsport on the box!

As part of Speedcafe’s unrivaled charter to bring you the most current information first, we have ramped up our ‘Television Times’ section of the website to include all of the racing action from free-to-air channels and your favourite pay TV networks.

From V8 Supercars to Formula One, drag racing to speedway, motor bikes to motocross, the Television Times is packed full of racing action. In fact, it’s probably a case of ‘when too much motorsport is never enough!’

The ‘Speedcafe Television Times’ include daily times for the Seven Network, ONE HD and SBS, plus pay TV stations Fox Sports, ESPN and the recent addition of Eurosport to pay TV subscribers.