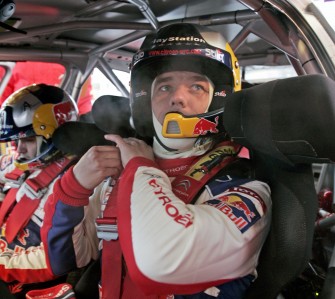 The Frenchman slid wide and side-swiped a narrow bridge with his C4 World Rally Car.

The incident happened 5.4km into the 22km Cassidy stage north of Auckland. It left his Citroen with extensive side panel damage and a door which he had to hold shut with a Velcro strap.

“I lost the back of the car on the entry to a tight corner over a bridge,” said Loeb.

“The back of the car slid and hit the bridge. I thought it was okay, so we drove on, but it wasn’t and I was about to lose the door.

“I knew it was just a remote service after, so I had to keep the door. I stopped for one minute to try and close the door. I couldn’t so I held it closed. The dust was very bad.”

“The morning has been good,” said Sordo.

“But the rally will not be decided here. We have to think about the rest of the event.

“I’m happy for now, though – but the difference is not so big between the cars. Maybe the road is not cleaning quite so much.”

After service crews face another five competitive stages including the day’s finale through the Domain in central Auckland.