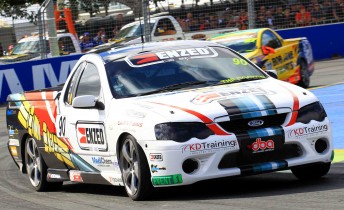 Chris Pither will make a return to Australian race circuits next weekend when he competes in the Yokohama V8 Utes Series at Winton Motor Raceway.

The New Zealand V8 Ute Champion will drive the Ice Break-backed Holden VE that was driven by 2008 Champion Layton Crambrook at the first round of this year’s series (Adelaide).

The young Kiwi has competed in many different Australian race categories since in 2005, including V8 Utes and the Fujitsu V8 Series. Pither hasn’t been in a Holden for a while but is excited by the challenge.

“I’m looking forward to being back in the series,” he said.

“I’ve been out for a while now but it was good practice against the guys at Clipsal and then again at the Trans Tasman Challenge and I think I have what it takes to run up the front.

“It will be nice to be racing in the Ice-Break Racing team alongside former Kanga Loaders team-mate Gary MacDonald.”

In other V8 Utes news, Crambrook is yet to confirm he will be competing at Winton in another V8 Ute after his split with Ice Break Racing. He has, however, asked to have his #71 kept safely on hold until he reaches a decision.

Also, Yanis Derums will return to the series, driving the car formally driven by Dennis Cribben.