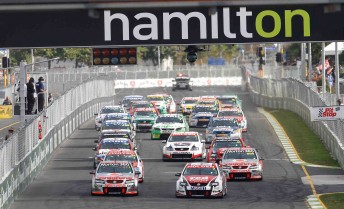 With Calvert suffering from personal financial problems, Speedcafe.com.au understands that a new deal between the Hamilton City Council and V8SA will see V8 Events take over as promoter which includes an extension on its seven-year agreement (due to end in 2014).

V8SA Chairman Tony Cochrane, now on his three-month sabbatical, told Speedcafe that a deal to run the event is in the future is a real possibility.

“We understand that the promoters have got their own personal financial problems and clearly from our point of view, we’ve got a great working relationship with the Hamilton City Council. It has invested heavily in that event, and if it wishes to have a situation where we get more involved, it’s something that we’d look at and something that we’d work with them in partnership.

“New Zealand is a very, very important market to V8 Supercars. We understand that in the past 18-24 months, they’ve been through a very difficult economic period that has affected every form of life – and all their sport, whether its Rugby Union or motorsport.

“We’re not fair weather players. We’ll do what we have to do to stick in for the long haul. We’ve got an awful lot of fans there, and a lot of people in our championship are from New Zealand. For all of those reasons, we’ll find a way to make sure it continue on.”

An announcement is expected soon in regard to the new position V8 Supercars could play in the Hamilton race.

This year was the 11th-consecutive season that V8 Supercars have held a championship race meeting in New Zealand.