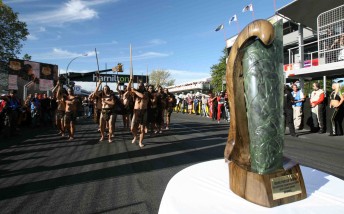 There will not be a second V8 Supercars round in New Zealand in the short or long term future.

The V8 Championship Series is sanctioned by the FIA – the world motor sport governing body. Under its law, a domestic series can only hold one event in a different country, unless there is a special request from the local authority.

V8 Chairman Tony Cochrane says that MANZ (New Zealand’s CAMS equivalent) does not want a second V8 round as it would take away from its own local motor sport categories and events.

“This topic often comes up. The truth of the matter is that we cannot do two rounds in New Zealand,” he said.

“Under the FIA regulations, we are an Australian-based category, and we can only visit foreign countries once.

“The only way we could get around that is if MANZ gave us special permission to do so.

“They would be reluctant to do that because they are concerned that it would affect their domestic motorsport championship. I understand that point and I probably agree with them.

“It’s not a question of whether we want to do two round there, under the FIA rules, its impossible to do so.

“MANZ’s position is that they feel it would affect their local racing, we respect that, and we have no intention of trying to hassle them into allowing us to do a second round in their country.”