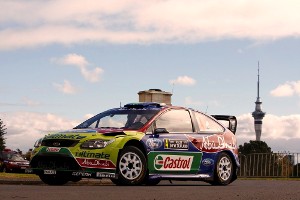 The four hour test took place in dry conditions on a 1.5km asphalt road in the Auckland Domain in the centre of the city. The same section will be the final stage tomorrow.

With the vast majority of the rally based on gravel roads, the sealed-surface Shakedown was of limited value as a set-up exercise, but was an unusual opportunity for the drivers to recce a rally stage at competitive speed.

“I was determined to set the fastest time because in the past on this surface I’ve lost out to the pace of the Citroens,” said Latvala.

“We struggled on the asphalt Super Special in Australia last year but now I think we’ve found a set-up which gives us an edge.”

Loeb set his best time – which was two-tenths slower than Latvala’s – on his final pass.

“It wasn’t a difficult Shakedown but we weren’t able to get much of a feeling for the event on it,” said Loeb.

“Normally Shakedown gives us a final chance to adjust the set-up, but with no pre-event test we haven’t been able to do anything much. It should be okay though, we’re not changing the set-up too much from rally to rally.”

After a ceremonial start in the Auckland this evening, the opening stage of the rally is just after 9am (local time) tomorrow morning.