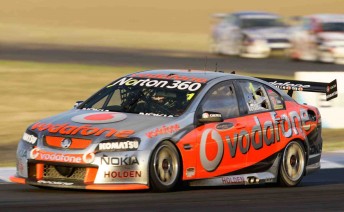 Jamie Whincup had his worst V8 race meeting of the year, but continues to lead the title chase

Jamie Whincup has admitted that TeamVodafone had a tough time finding the right balance on his Holden Commodore VE in the ‘all-Sprint tyre’ round at Queensland Raceway last weekend.

The V8 Championship Series leader finished fourth in Saturday’s race before engine problems ruled him out on Sunday, diminishing his championship to just 24 points.

“That wasn’t the weekend we were after,” he wrote on his website.

“I have to admit we found it really difficult to find a nice balance in the car and ultimately go quick.

“Clearly I am disappointed and angry about the result, however we still lead the battle. We tackled another major challenge, although we have no silverware to show for our efforts.” 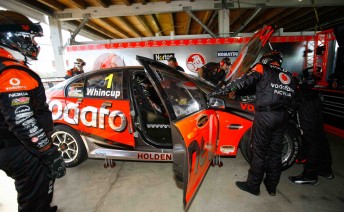 Whincup posted his worst qualifying result of the year in Saturday’s race (12th) before racing through to fourth place.

“Saturday was really tough. After qualifying was complete we were a dismal 12th quickest. A bit of shock as we haven’t been off the front row all year,” he said.

“I felt the car wasn’t that strong and I didn’t do the best job either. We fought hard in the race and clawed our way back to fourth. I had my eye on Garth Tander the whole race and it was really nice to slip through on the inside with two laps to go.“

On Sunday, the two-time Champ blitzed the field to pole and was looking strong for another win until the #1 Commodore broke an engine rocker.

“When most of our opposition thought we were a long shot for the win on Sunday, we hit them hard with a pole position Sunday morning,” he said.

“I was really impressed with the improvement in the car overnight and we managed to pull away from the field. On lap 22 the car picked up a misfire in the engine. Although it’s important to keep positive I knew our day was done. “

Whincup’s big early season championship lead is now gone – down to 24 points between himself and Jim Beam Racing’s James Courtney who won both races at Queensland Raceway.

The battle between the pair continues next week at Winton Raceway (May 14-16).