Queensland Raceway to be resurfaced

Queensland Raceway to be resurfaced 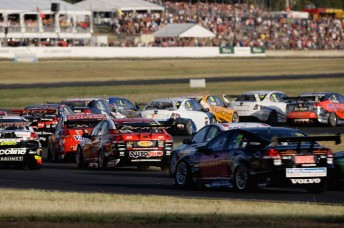 Preparations are beginning for the resurfacing of the Queensland Raceway circuit as it works towards securing another round of the V8 Supercars Championship Series round in the future.

The resurfacing of the track will commence in the next three months with the new surface being laid straight over the top of the old surface. The new surface needs to be laid at least six months before a V8 Supercars race can take place (due to the weight of the cars and the stress they put on the track).

At this stage, there is no confirmation if the V8s will return to the Ipswich circuit in the future.

The current surface is the original surface laid in 1999 when the circuit first opened. Only in a few small patches has the track been resurfaced.

Circuit owner John Tetley told Speedcafe.com.au that the new surface will be an improvement, although the only time he hears complaints about the current surface is when V8 Supercars drivers race there …

“We’re hoping in the next three months it will start,” he said.

“It would lay over the top. The track has been exceptionally well maintained – probably one of the best in Australia.

In other Queensland Raceway news, investigations will begin this week in regards to the major MINI accident that saw the car of Kain Magro roll into the spectator area on Saturday at the track.

Magro’s MINI collided with Sarah Harley on the approach to turn six with Magro’s car flipping onto its roof before rolling over the circuit’s two lines of defense and into the spectators area.

“We will go through a full evaluation process. We will look at what happened and try and work out the likelihood of that happening again,” Tetley said.

“It was a freak. It was a one in 10 million chance. We’ve never seen that occur before.”

Two spectators were injured. One man was released from hospital that night, while the other man sustained a hairline fracture to his neck and will undergo further tests.

The Saturday incident was followed by another MINI incident on Sunday when Harley’s car failed to stop before and slammed into the tyre barrier, rolling over as a result of the impact. Harley was taken to Ipswich Base Hospital but declared OK after examination.

See video below of the two horror MINI accidents over the weekend.