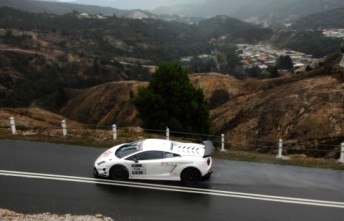 After six gruelling days of competition, local driver Jason White has triumphed in the modern section to add a second Targa Tasmania title to his collection.

Driving his Lamborghini Gallardo Super Trofeo Strada, White and his co-driving uncle, John White, led from start to finish to claim a 63 second win ahead of Queenslander Ray Vandersee in a Skelta G-Force, and Tony Quinn in a Nissan GT-R.

The Classic Outright competition was won convincingly by Victorian, Rex Broadbent, who produced a near faultless drive in a 1974 Porsche 911 RS.

Melbourne driver, Paul Batten, secured the Classic Handicap title with a superb performance in his 1961 Volvo PV544 across the 504 competitive kilometres.

Tasmanian Tony Warren was the dominant force in the Showroom competition droving his Mitsubishi Lancer Evo IX to a one minute and 45 second victory – his second in three years. Second place went to the Mazda3 MPS of Brendan Reeves, with Dean Evans third in a Lancer Evo X, nine seconds further back.

After previously winning Targa Tasmania in 2005 in a Nissan GT-R, Jason White’s victory comes after many years of trying in the Italian supercar. Recent changes to the Lamborghini’s specification have made the car faster than ever, and he was untouchable over the course of the event.

“When John announced a month ago that we were going to change the car to the new model, I had mixed emotions about it all,” White said.

“We were all pretty excited about it, but I was quite scared knowing the amount of work and man hours that would be needed. We were delighted just to get it to the start line, but I was shaking in my boots knowing that I hadn’t seen any these roads since last year.

“To get it this far has been extremely satisfying. To be involved in building the car and then to have a result like this is amazing.

“We’ve got our name on the trophy twice now, but others have got it there eight times, so we’re not going to rest at this. There’s a record out there that we’d like to chase after.”

Broadbent was rarely challenged as he charged to back-to-back Classic wins. Despite only entering the event at the eleventh-hour, his Porsche 911 never missed a beat to take a clear victory.

Tony Warren led from the start in the Showroom competition. His blistering speed early in the event had his rivals expecting the Lancer Evo IX to run out of tyres, but a polished drive over the final days ensured he took the step to the top of the podium.