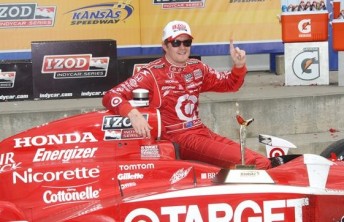 Dixon, who will drive for Jack Daniel’s Racing at the Armor All Gold Coast 600, held off team-mate Dario Franchitti (another Gold Coast entrant) over the final six laps after a restart in the first oval race of the season.

Andretti Autosport’s Tony Kanaan improved 11 positions to finish third and Helio Castroneves was fourth.
Ryan Hunter-Reay, driving the No. 37 IZOD car for Andretti Autosport, moved up 17 spots from his starting position to finish fifth, while pole-sitter Ryan Briscoe in the No. 6 Team Penske car finished sixth (and best of the Australians). Alex Tagliani was seventh in the No. 77 FAZZT Race Team entry.

It was Dixon 22nd career IZOD IndyCar Series victory and said that winning the final race before the Indianapolis 500 is a “big deal.”

“It’s was huge. Winning at Kansas going into the month of May is a big deal,” he said.

“Team Target has had a slow start to the season, but this is what we need and jump back into points table. It’s certainly good to get that momentum going to Indy.”

Australian Will Power finished down in 12th place but continues to lead the championship after for rounds.

“I had a busy day out there in the Verizon car,” the Penske driver said.

“The first stop I went a touch long in the pit box which cost us some time. The car felt pretty good all day. The restarts were interesting and I definitely have a better idea of who I can work with out there. Overall, I’m glad we ran as well as we did and I’m feeling good going into Indy.”