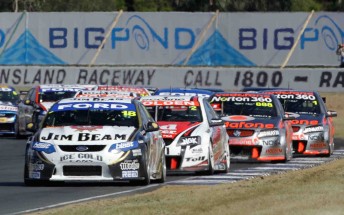 James Courtney is keen to see how Jamie Whincup reacts to the pressure of a genuine championship threat in the coming rounds of the championship.

Courtney scored maximum championship points at Queensland Raceway this weekend, winning both Races 9 and 10 of the V8 Series.

On the flipside, Whincup finished fourth on Saturday, qualified on pole for Sunday’s race but suffered an engine problem, leaving him 24 points ahead in the title. He started the weekend with a 204 point buffer …

“It’s good to have that points gap closed on Jamie and we can start putting some pressure on him and see how he operates under that. It will be interesting,” Courtney said.

“Everything is just snowballing. To think where we were halfway through last year, everything has been getting better and better. The team has been finding our feet more, learning more, changing the car and really developing the thing.”

Courtney credits his team, car and a major improvement in qualifying to the win.

“The car was flawless. I didn’t have to worry about conserving the car, I could place it where ever I wanted,” he said.

“We just hit the nail on the head early in the weekend and we were able to get a good race car. I struggled with our qualifying car all year, but it was good this weekend to get two front-rows. It would have been nice to get a front-row, but we’re shining up in all areas and it’s coming on strong.”

The next round of the V8 Supercars Championship Series will be held in two weeks at Winton Motor Raceway.