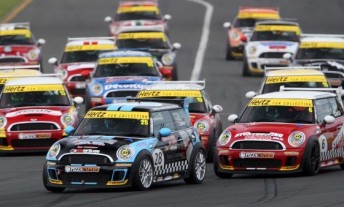 MINI Challenge competition from the Australian Grand Prix in March

A major MINI Challenge accident has injured two spectators and brought a halt to proceedings at Queensland Raceway in Ipswich today.

Magro’s car rolled several times before launching over the spectator fence and into a crowded area.

The incident happened just after midday (Queensland time) on the ninth lap of the first race of the weekend.

Ambulances and medical teams were quickly in attendance and racing was suspended.

The MINI Challenge is an official support category of the V8 Supercar Championship Series.

Magro, 22, is from Mareeba in Far North Queensland. Harley is from Redcliffe, Queensland.

Racing resumed at the Ipswich circuit at 1pm with the V8 Supercars Top 10 shootout.

The spectator area on the outside of turn six has been cordoned off by police and event organisers.