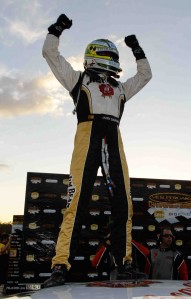 James Courtney has labeled his win today at the Ipswich 300 as the “sweetest” of his V8 Supercars career.

The 29 year-old’s win has narrowed the championship gap to runaway title leader Jamie Whincup – and Courtney now considers himself a genuine championship chance.

It was the Jim Beam Racing driver’s fourth V8 career race win, and he says that his success today was better than any other.

“I’d say this is probably the sweetest (win),” he said.

“It was such a dominating performance from the team. The car was flawless. My job was made really, really easy, just through the preparation from the guys behind the scenes.

“When the car is really well hooked up, you’re just cruising and you’re pulling time out from everyone else, and that’s exactly what I had. When the car’s like that, it looks after itself and I didn’t have to conserve anything. I could just cruise around.”

Courtney says that Whincup’s 174 points lead in the championship is now in his sights.

“We definitely had good speed today and we took points out of Jamie, and if we can take them out for the rest of the year, we should be in with a good shot at the end.

“We always knew we were going to be a good chance this weekend. We’ve always gone well here in the past, I won here with SBR two years ago. It’s a place that I like to come to. It’s good to get a victory.”