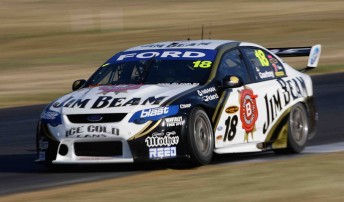 James Courtney has taken the provisional top spot at the end of the first leg of V8 Supercars qualifying at Queensland Raceway this morning.

Courtney dominated the session, finishing 0.4s ahead of next best Shane van Gisbergen. In fact, it was a Ford 1-2-3, with Courtney’s Jim Beam Racing team-mate Steve Johnson in third.

It was an outstanding result for Fiore, who will line-up in his first-ever shootout.

While Fiore will be celebrating, championship leader Jamie Whincup won’t. The TeamVodafone driver will start Race 9 of the V8 Supercars Championship Series from 12th, one spot behind Jack Daniel’s Racing’s Rick Kelly. It is the first time that Whincup hasn’t qualified in the top 10 since the last race of the 2009 season – and also the first time this year he won’t start a race from the front-row of the grid.

Another significant result in the pack include Daniel Gaunt, who will start from 21st place – his best-ever V8 qualifying result.

The shootout will be held at 12.25pm, followed by this afternoon’s race at 4pm.