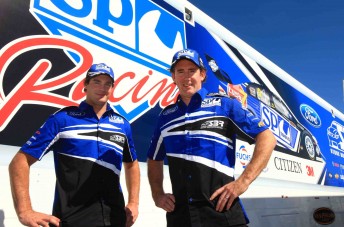 The Kiwi drove the #9 SP Tools Ford Falcon FG at Queensland Raceway today (and topped Practice 1 in the endurance/rookie session).

McIntyre raced with Stone Brothers Racing team in last year’s endurance races (with Daniel Gaunt) and also had a one-off drive in this year’s Clipsal 500 in the Fujitsu V8 Series. The two-time NZV8 champ is thrilled to be back in the seat, pairing up with van Gisbergen for the three main events.

“This drive with SBR is something I have been working on for four or five years really, I have stayed in regular contact with Ross [Stone] a lot,” he said.

“Obviously last year getting the drive in the #4 car was a real vote of confidence from SBR and getting to lead that car gave me a lot of experience. Finally all the stars have aligned and I am in the seat I want to be in.”

It will be the second time that van Gisbergen and McIntyre have teamed together after they competed at the Sandown 500 and Bathurst 1000 in the SBR-prepared Team Kiwi Racing Falcon in 2007. At the time, van Gisbergen was only in his first few V8 races.

And when it comes to the Armor All Gold Coast 600 event, it won’t be the first time McIntyre has raced on streets of Surfers Paradise.

“The Gold Coast race is going to be a really special event,” he said.

“I ran at Indy back in 2004 for WPS and I’d just done Bathurst and thought it can’t getting harder but then I actually thought the Gold Coast was harder.

“It’s going to be a really difficult race but is an absolute bonus considering I will have just raced at Phillip Island and Bathurst with Shane so we will be well and truly in the zone by then.”