Lowndes: We’ll have to go faster for pole

Lowndes: We’ll have to go faster for pole Craig Lowndes says that he’ll have to be faster to remain at the top of the V8 Supercars time sheets after ending today’s practice sessions at the front of the field at Queensland Raceway.

Lowndes, the #888 Team Vodafone driver, was the fastest driver at the end of the four practice sessions in the first-ever V8 Supercars event where the softer compound ‘Sprint’ tyre is in use for the whole weekend.

While Lowndes failed to beat John Bowe’s long-standing practice lap record at the Ipswich track (1:09.2595s) by 0.3s, he says that tomorrow will see the cars go even faster on the sticky tyres. 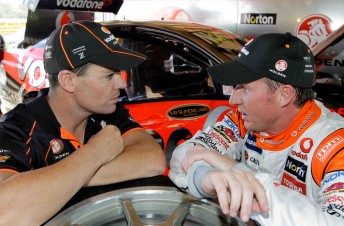 “This is the first time that we’ve had the chance to try and set the tyre up on the soft tyre, purely for a qualifying session. There’s still a bit of work for us to go, but we’re pretty happy with where we’re at,” he said.

“We hoped to knock off Bowe’s time, but I think a low-09s will be thereabouts for a pole position. Who knows what the grip level is going to do, comparing this afternoon to tomorrow. And the temperature will pay a bit part as well. As locals, we know what the track is like when it gets hotter or cooler.”

“The tyre has completely changed the characteristics of the car,” he said.

“To be honest, the car didn’t feel that flash. I’m very confused on what it needs and how to go quicker. I’m just thankful that Lowndes is quick so we can learn off him a bit.”

Jim Beam Racing’s James Courtney was the first of the Fords in third place and complimented his Triple Eight-built chassis – the same manufacturer that builds the TeamVodafone Holdens.

“Triple Eight cars are obviously working well here and I’ve got one of them as well,” he said.

“We did some longer runs – we probably did more than most – and we’re pretty happy with the information we’ve got, but we’re definitely not happy with the outright speed.”