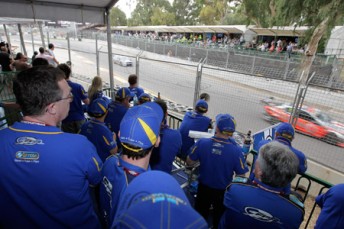 Orrcon Steel guests watching on from the corporate suite

Former V8 Supercar Team Manager, Keith Evers, has been diagnosed with Acute Myeloid Leukemia – commonly known as AML and is under going chemotherapy at the Gold Coast Hospital before another assessment is made on the next phase of his treatment.

Orrcon Steel, sponsors of Ford Performance Racing, are regarded as the leaders in corporate hospitality when it comes to their customers and one lucky bidder and a friend are going to experience just that first hand.

Orrcon Steel are offering up two three-day corporate tickets for the Sydney Telstra 500 at Homebush in December, including flights from Melbourne or Brisbane (if needed) and three nights twin-share accommodation, as well as a personal meeting with Mark Winterbottom and Steve Richards, a tour through the Ford Performance Racing pit area and a team merchandise pack.

This item will be auctioned along with 21 other high-end items in the Queensland Raceway paddock area from 2.30pm on Saturday – the auction will be hosted by Channel 7 celebrities.

Orrcon Steel Event and Sponsorship Manager, Stewart Smith, said that Evers was a friend of the Orrcon Steel Racing family.

“Keith was the Team Manager at WPS Racing when we were involved with that team and was always fantastic towards us and our customers,” said Smith.

“We were all gutted when we heard his news and hopefully this auction item will develop a chunk of change for the fund. We are sure the motorsport public will get out there and support this event as much as they can at the weekend.”

The weekend’s fund raising will also include a three-day memorabilia store where teams, drivers and fans have donated a whole host of items for sale. It will be in V8 Supercar merchandise area.

Jack Daniel’s Jukebox – Donated by Jack Daniel’s
This is another pretty cool piece of kit. This limited edition jukebox features an ipod docking station, CD player, built in amplifier, FM Radio, and stands more than a metre high. It has been signed by both Rick and Todd Kelly and comes with a couple of Jack Daniel’s Racing hats.

Lewis Hamilton limited edition print – Donated by George and Liz Stockman
Race fans from Melbourne have donated this limited edition Lewis Hamilton piece which is a montage celebrating his first F1 season. 95sm long by 45cm, it is autographed by Hamilton and authenticated by the Helping Hand Group. It was originally purchased at a Frank Gardner charity auction and has been forward on for this cause.

V8 Supercar Teddy Bear – Donated by – BAM Media
A unique, six-foot tall teddy bear sporting a V8 Supercar tee-shirt which has been signed by all 29 drivers in the 2010 V8 Supercar Championship Series. The bear is taller than a range of the actual V8 Supercar drivers themselves!

IRWIN Racing Hot Lap – Donated by Stone Brothers Racing
A ride alongside Alex Davison in the #4 IRWIN Racing Falcon V8 Supercar is certainly something worth getting your hands on! You can either strap in alongside Alex on his home test track at Queensland Raceway on December 13 at the team’s ride day, or otherwise if you simply can’t wait, you bolt into car #4 on July 27 at Eastern Creek or on July 29 at Calder Park. Not only do you receive the ride of a lifetime, but also a team merchandise pack and photo of your hot lap.

Steven Richards Castrol Race Suit – Donated by Ford Performance Racing
Two-time Bathurst winner Steven Richards is one of the most experienced drivers in the V8 Supercar field and one lucky bidder will get to take a piece of Richo home – well, something that was part of him in 2008! A signed, Castrol Edge/FPR race suit is up for auction for one lucky bidder from the season where ‘Richo’ qualified on pole and finished on the podium at the L&H 500 at Phillip Island.

Limited edition Versace bowl/vase – Donated by Graham Stonehouse
This is one of the most unique pieces in the auction. It is a limited edition Versace vase/bowl which is valued at more than $2000 retail. We have turned it into even more of a collector’s item by having the only two surviving five-time national touring car champions, Mark Skaife and Dick Johnson, sign it!

Orrcon Steel Hospitality Package – Donated by Orrcon Steel
Orrcon Steel are renowned for the best hospitality in the business and are offering up two three-day corporate tickets for the Sydney Telstra 500 at Homebush in December. This includes economy flights from Melbourne or Brisbane and three nights twin-share accommodation, as well as a personal meeting with Steve Richards and Mark Winterbottom, FPR pit tours and a team merchandise pack – this is doing it in style!

Ride with Kevin Bartlett in the Channel 9 Camero – Donated by the Bowden Family
How about a ride with one of Australia’s greatest touring car legends in one of the sport’s most famous cars? The Bowden family and their company, Bowden’s Own Premium car Care Products, is giving you the chance to cut some laps of Queensland Raceway with Kevin Bartlett in the famous Channel 9 Camero. The ride will be taken at one of the company’s test days at Queensland Raceway in the coming months. The winner will be provided with plenty of notice and will have the chance for a photo with KB and the Camero and an autograph or two!

Ford Performance Racing Hot Lap – Donated by Ford Performance Racing
Mark Winterbottom has started 2010 in brilliant form and one lucky bidder will get to see him at work much closer than the rest of their fellow V8 Supercar fans. The lucky bidder will get a hot lap with ‘Frosty’ in the #5 Orrcon Steel FPR Falcon at either Winton on July 27 or Phillip Island on September 14, as well as a team merchandise pack. This is a full corporate day with other activities and lunch.

TeamVodafone Rare Panel – Donated by Triple Eight Race Engineering
TeamVodafone raced with a unique pink livery at the 2009 Sydney Telstra 500 in support of the McGarth Foundation and the fight against breast cancer. One lucky bidder can score themselves a special part of V8 memorabilia, the damaged front left ‘pink’ guard off Craig Lowndes’ FG Falcon from that weekend. It is signed and dated by Craig himself. There will also be a driver and car image for future framing.

Dunlop Race Tyre and Rim – Donated by – Dunlop and Racer Industries
Dunlop provide the control tyre used by all V8 Supercar teams and they have arranged a very special piece of one-off memorabilia. Given the strict restrictions of tyres in V8 Supercar racing, the fact that Dunlop have donated a brand new V8 Supercar race tyre on a new rim supplied by Racer Industries. It is simply fantastic. It has been signed by all V8 Supercar drivers and special permission has been given by Dunlop and V8 Supercars Australia for this one-off memorabilia to be produced.

Jim Beam Racing – James Courtney – Race Suit – Donated by Dick Johnson Racing
Jim Beam Racing’s James Courtney is one of the stars of the V8 Supercar Championship Series. In 2009 he helped lift DJR to third in the V8 Supercar Team’s Championship. Courtney’s race suit from 2009 would make a fantastic edition to any collection. It is the suit he used when winning last year’s inaugural Dunlop Townsville 400. It has been signed by the former karting World Champion and comes with both driver and car images for future framing.

Marcos Ambrose NASCAR gloves – Donated by BAM Media
A pair of signed Marcos Ambrose gloves as worn by the ‘Tassie Devil’ in the 2010 NASCAR Sprint Cup Series race at Auto Club Speedway in Fontana, California. Comes with Driver and car images for framing.

Jason Bargwanna WPS Race Helmet – Donated by Jason Bargwanna
The 2000 Bathurst winner, Jason Bargwanna is one of the most personable drivers in the V8 Supercar Championship Series field. Now driving the Rock Racing Commodore for Kelly Racing, Bargwanna spent the 2006 and 2007 V8 Supercar seasons with WPS Racing and has donated and signed one of his original race helmets from his time with the team for the auction.

TeamVodafone Hot Lap – Donate by Triple Eight Race Engineering
A hot lap with either Craig Lowndes or Jamie Whincup at Queensland Raceway on October 28th at the team’s annual ride day. Imagine going more than 265kph with one of these legends of the sport. The package also includes lunch and a signed commemorative photo from the ride day.

Wilson Security Gold Coast Experience – Donated by James Rosenberg
Hot laps at the Gold Coast V8 Supercar event are extremely rare so this race weekend package with Tim Slade and Wilson Security Racing is very special.
The winning bidder will score a ride alongside Tim in the #47 Falcon on October 22 at one of the biggest events of the year that is expanded in 2010 with the arrival of a range of international racing stars. The package also includes two, three-day admission passes and a Wilson Security Racing team merchandise pack.

Jim Beam Racing – Steve Johnson – Race Suit – Donated by Dick Johnson Racing
Jim Beam Racing’s Steven Johnson enjoyed a brilliant season in 2009 as he helped lift the iconic team to finishing third in the V8 Supercar Team’s Championship. “Junior’s” race suit from 2009 would make a fantastic edition to any collection. It has been signed by Steve and comes with both driver and car images for future framing.

00 Motorsport team shirt – Donated by Neil Crompton
One of the teams that Keith Evers has worked for in V8 Supercars is the original 00 Motorsport operation. Neil Crompton was one of the drivers that year along with Craig Lowndes. Both have signed an original team shirt. It comes with driver and car shot for future framing.

Formula Ford test with Borland Racing – Donated by Borland Racing
Borland Racing has donated a full Formula Ford test and evaluation day at Winton Raceway in North East Victoria in August or September in a 2010 Spectrum. The test is for either a talented young driver looking for a break in the sport or a fan wanting a once in a lifetime experience. The only conditions of the test are that the winning bidder must comfortably fit into the car, they are available on the nominated test day and that a pre-test document is signed to cover any damage on the day.

Steve Bradbury limited edition print – Donated by Steven Bradbury
One of the “left of field” pieces in the Keith Evers auction will be a personally-signed print celebrating Australia’s first Winter Olympic gold medal won by Steven Bradbury in Salt Lake City in 2002. A keen motorsport competitor, Steve will be on hand to present it.

PART OF MISS V8 SUPERCAR SWIMWEAR JUDGING – Grid Girls Australia
How about this! – the final spot on the judging panel for the Miss V8 Supercars swimwear judging at Queensland Raceway on Sunday, May 2. at 11.30am. You will also receive an autographed poster from the girls and group photograph.

Will Power Team Australia Champ Car Helmet – Donated by WPS
This is a race helmet from Will Power’s season with Team Australia and Walker Racing in 2006. Power, who will race at this year’s Armor All Gold Coast 600 in October, will sign the visor with any message you want.