Bright offers advice to youth at 150th round

Bright offers advice to youth at 150th round 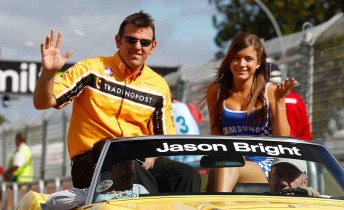 Being able to offer something over and above your opposition is the key to a start – and longevity – in V8 Supercars racing, according to Jason Bright.

The Trading Post Racing driver celebrates 150 Australian Touring Car/V8 Supercars starts this weekend at Queensland Raceway, and notes that for young drivers, getting a start in the competitive series is becoming difficult – although not impossible.

“I guess there are two aspects to a long career in V8s – one is being able to get the results for the team and the sponsors obviously, but secondly it’s hard for young guys to get a start in the category because sometimes it’s a gamble for teams to change too much so they stick with what they know,” he said.

“I think there’s plenty of guys knocking on the door who could do a good job, whether it’s in the Fujitsu Series or Formula Ford, but it’s all about making the right moves and then making the most of it when you get there.

“Whether that’s looking after sponsors or developing the car, you’ve got to be able to offer something over and above the next guy.”

Bright started his V8 Supercars career in a one-off drive for Garry Rogers Motorsport at Symmons Plains in 1997, and despite a year out of the sport in 2000 (pursuing a American open-wheel career), his V8 stats are impressive. He has racked up 10 pole positions, 15 race wins and 69 podiums, with a best championship position of third (2001 and 2004).

While there’s been some highlights, Bright has endured some lows, mainly at the hands of his own racing operation that he set up in 2005 and dissolved in 2008.

Regardless, he says that wins in the category are still possible.

“I think that I can still do that,” he said.

“I would say that even under the difficult circumstances of the last couple of years, when I’ve got the car into the window I’ve had some fair performances especially at the end of last year. I’m sure that’s going to happen again this year and I believe I’ve got plenty of years to come where I can battle for race wins and championships. That’s one of the beauties of our sport.”

Team owner Bradley Jones, who has 109 ATCC/V8 Supercars starts to his name, says that age has not slowed the Trading Post driver.

“150 is a reasonable amount and it’s amazing considering he’s been in and out of the championship with his overseas career,” he said.

“The great news is that he doesn’t slow down at all. He’s still as fast and as competitive as he’s ever been.”

Practice at Queensland Raceway, Ipswich will start at 10:55am tomorrow.