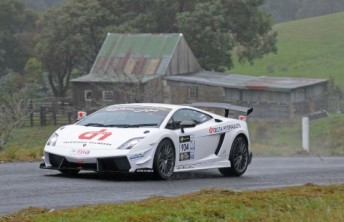 While wet and windy weather lashed the north of the state, White powered on in his Lamborghini Gallardo Super Trofeo Strada, recovering from a slow start to end the day eight seconds clear of 2008 winner, Steve Glenney, driving a Mazda RX8.

Reigning champion, Rex Broadbent, used all of his experience and guile to finish the opening eight stages as the fastest Classic car, while Tasmanian Tony Warren was again the pace setter in the Showroom division.

White knows that with four days to go he will face many challenges, but none that will come close to the morning stages on the opening day.

“We were sitting at the start line and just as we went to start the stage a massive squall came through and the car was actually shaking from side to side because of the wind.

“Just after we took off the heater stopped working and the windscreen completely fogged up and all I had was a tiny little gap to see through to drive the stage.

“But as soon as the weather cleared up on the next couple of stages we started to make amends for it and we had a great run through Mersey Lea and grabbed the lead.”

Glenney was also highly impressive in his two-wheel drive car against the four-wheel drive Lamborghini.

2009 winner, Tony Quinn, sits in third place, and while he is 30 seconds from the lead, he is well aware that there is still a very long way still to go.

As expected, the Classic battle was tightly fought, with Rex Broadbent holding sway at the end of a tough day.

After setting the pace in yesterday’s Temco Prologue, Tony Warren was again the man to catch in his Showroom competition Lancer Evo IX. He finished the day 28 seconds clear of the new Lancer Evo X of Dean Evans, while in third place sits the front-wheel drive Mazda3 MPS of Brendan Reeves.

Leg 2 of Targa Tasmania takes competitors west of Launceston over eight Targa stages, including one of the event’s most famous stages, ‘The Sideling’.