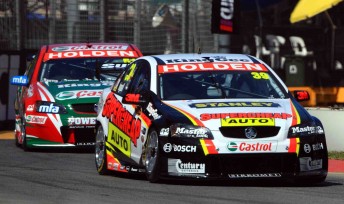 Supercheap Auto Racing Holden driver Russell Ingall says the racing in this year’s V8 Supercars Championship Series has been too predictable and has suffered as a consequence.

The two-time Bathurst 1000 winner and 2005 V8 Series champion labeled this year’s racing as “lacklustre,” but says that the introduction of Dunlop’s all-soft tyre round this weekend at Queensland Raceway – the City of Ipswich 300 – couldn’t have come at a better time.

“The racing’s been lacklustre up until now, there were a lot of changes during the off-season but there definitely hasn’t been a change up the pointy end of the grid,” Ingall said.

“I’ve spoken to other drivers and they agree – it’s nice for some of them to be up the front all the time, but it’s not good for the racing or the sport.

“There’s no easy fix, but using the Dunlop soft tyre this weekend should shake things up a fair bit.”

Ingall says that this event will be pivotal for the category after two largely uneventful races at Hamilton, New Zealand, two weeks ago.

“It will be pivotal, perhaps not as far as the championship’s concerned, but as the whole category goes in terms of providing entertainment for the race fans,” he said.

“So far, the racing has been far too predictable, and people don’t like that. This could change their minds – that’s what I’m hoping for.”

The Dunlop Sprint tyre is the only rubber that the V8 Supercars will qualify and race on this weekend, and even though everyone is still on the same compound, ‘The Enforcer’ says the characteristics of the soft tyre’s life will provide the difference.

“With the [soft] tyre, there’s a short window of performance and a massive deterioration rate in its effectiveness, so there’s a lot of strategy involved as to when you make the most of it,” Ingall said.

“It’s how you play the game – do you punish the tyre early or try be conservative?

“We want guys wobbling around towards the end of the race coming under fire, situations where you can attack because you’ve changed tyres later or conserved them better, giving you a chance of coming through the field.

“The cream always rises to the top, but we’ll see more passing and a different mix of people racing up the front, and that’s exactly what the sport needs at the moment.”

The Supercheap Auto Racing driver has good form around Queensland Raceway of late, having scored a podium in Sunday’s race last year, plus re-setting the lap record.

Practice for the City of Ipswich 300 begins Friday with qualifying, the Top 10 Shootout and Race 9 on Saturday followed by qualifying and Race 10 on Sunday.