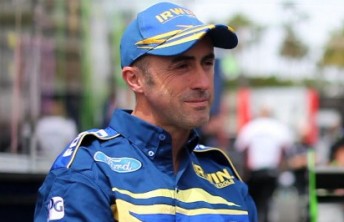 Reigning Le Mans 24 Hour champion David Brabham is the only Gold Coast 600 international driver committed to racing in all three V8 Supercars endurance races this year – and he says that’s a massive advantage for himself and Irwin Racing.

Brabham will partner Alex Davison in the Stone Brothers Racing Ford Falcon FG at the L&H 500 at Phillip Island, the Supercheap Auto Bathurst 1000 and then the revamped Armor All Gold Coast 600.

Brabham is confident of a good result in all three races, considering the amount of laps he’ll get.

“It’s fantastic to be driving at IRWIN Racing,” he said.

“Obviously it’s going to be full on with all the internationals (at the Gold Coast 600). Fortunately I’ll get some practice before hand at Phillip Island and Bathurst, which will make driving on the Gold Coast easier – in terms of understanding the IRWIN Ford. 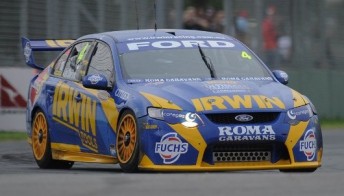 “I’ve been away from V8 racing for too long. I’ve been to Bathurst many times. I’ve won there in a 2 Litre and I want to win it in a V8. To be able to do this with someone like Stone Brothers is pretty cool, they set the benchmark very early on in terms of running the cars competitively.”

Brabham, son of three-time Formula One world champion Jack Brabham, won the famous LeMans 24 Hour race and the American Le Mans series in 2009. He has a strong Bathurst pedigree having raced at Mt Panorama on multiple occasions, winning the Super Tourer Bathurst event in 1997 partnered with his brother Geoff.

Brabham will make his debut with Stone Brothers Racing this year having last raced at Bathurst in 2006 with Ford Performance Racing. He has also competed in V8 Supercars with Wayne Gardner Racing and Dick Johnson Racing.

Regular IRWIN driver Davison says that Brabham was not only his first choice for a Gold Coast international driver, but endurance driver period.

“I started talking to Ross (Stone) and Dave (Stuart – Alex’s engineer) about endurance drivers at the end of last year and David was my number one pick,” he said.

“I was really rapt when I was told that we had David for the enduros, then the changes to the Armor All Gold Coast 600 were announced and it worked in our favour. David will be well in the grove by then following his time in the IRWIN Falcon at Phillip Island and Bathurst.”