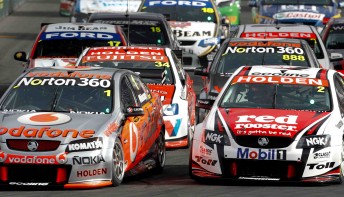 The V8 Supercars will be the lead act at the Armor All Gold Coast 600, including international drivers

V8 Supercar team principals have been overwhelmed with significant interest from race drivers around the world about competing in the Armor All Gold Coast 600 … next year!

After the successful re-launch of the event last Thursday night, including the list of the 18 international drivers that will compete with the local V8 Supercars drivers, local phones have been running hot with interested parties about competing in the 2011 event – even before a wheel has turned in the inaugural October event.

This year, former Formula One drivers, touring car legends and Indy 500 winners will converge on Surfers Paradise streets, and according to Speedcafe.com.au sources, if 2011 Formula One, NASCAR and other calendars line up favourably, next year’s list could be even better.

Triple Eight Race Engineering’s Roland Dane and Ford Performance Racing team principal Tim Edwards both admitted that international drivers who were not on this year’s list have contacted them about joining in the street fun in the future.

“I’ve had other drivers who are right up there in terms of profile ask me whether they could do it with my team in 2011,” Dane told Speedcafe.

“I think it’s incredible. The response has been absolutely incredible. I think it’s the best line-up that’s ever been in a touring car race anywhere. Therefore, that’s a reflection of the event and of our category.”

“There’s a lot of talk in the motorsport community around the world about the event,” Edwards said.

“I suspect there’ll be even bigger names in the future.”

“The event has been very well received. Three nights of major concerts is going to be a big draw card. I think the whole event has a new fresh feel about it. There’s no doubt there. It really does feel like it has a fresh start, which is what it needed. In some ways, the whole A1 Grand Prix from last year debacle did us a bunch of favours.”

The Armor All Gold Coast 600 will be held on October 22-24. Tickets are on sale now at Ticketek. Below is the full list of international drivers and the teams they will pair with for the unique street race.