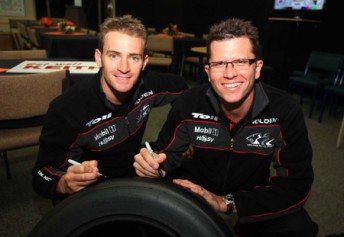 Some of the most unique pieces of Australian motorsport history will be up for grabs in a major fund raising event at the fifth event of the V8 Supercar Championship Series at Queensland Raceway this weekend.

All the money raised from the event will go to help pay the medical expenses of former V8 Supercar Team Manager, Keith Evers, who has been diagnosed with Acute Myeloid Leukemia – commonly known as AML.

Evers has a long history in V8 Supercar racing and Australian and international motorsport in general. His most recent role was as Team Manager with IntaRacing before financial issues forced his team owner out of the sport. Evers lives on the Gold Coast with his wife Kerrin and twin eight-old children and is unlikely to rejoin the workforce for at least another six months.

Teams, drivers, fans and sponsors have already committed a range of items for the store and auction including helmets, race suits, car parts, V8 Supercar rides, corporate tickets, team apparel and much more.

One of the premier items will be a brand new V8 Supercar Dunlop race tyre signed by all 29 current V8 Supercar drivers and mounted on a new control wheel. Strict control of tyre use and distribution has meant special dispensation had to be granted to make this one-off item available.

Borland Racing has donated a full Formula Ford test at Winton Raceway in Victoria, which is expected to be snapped by an up-and-coming young star or a fan looking for a once in-a-lifetime experience.

Orrcon Steel are renowned for the best hospitality in the business and are offering two three-day corporate tickets for the Sydney Telstra 400 at Homebush in December. This includes flights from Melbourne or Brisbane and three nights accommodation, as well as a personal meeting with Steve Richards and Mark Winterbottom, a tour through the Ford Peformance Racing pit area and a team merchandise pack.

The event is being organised by BAM Media’s Brett ‘Crusher’ Murray who is a long-time friend of Evers and who is putting up several items for sale and auction from his personal memorabilia collection built up over the last 25 years.

The event has the full support of V8 Supercars Australia who will be providing infrastructure and resources over the race weekend.

“I have been very humbled by the amount of well wishes I have received since word started to leak out about my condition,” said Evers.

“The motorsport industry is a very charitable one, but I was taken back a little when I was presented with the idea of the Queensland Raceway event. My family and I are extremely grateful for the support of everyone.

“This will help us, not only financially, but emotionally through what is a pretty tough time.”

V8 Supercar Chairman, Tony Cochrane, urged fans to get behind the May 1 event.

“Motorsport people and fans are some of the most charitable in sports, but I would like to think we can dig even a little deeper when one of our “own” needs some help,” said Cochrane.

“Keith Evers is a terrific bloke who has given his life to the sport and I urge the race fans of Australia to get behind this cause by making a donation, buying something at the memorabilia store or bidding at the auction at the Queensland Raceway event.”

Former Bathurst winner Jason Bargwanna was one of the first of the current V8 Supercar drivers to lend his support to the cause when he became aware of Evers’ illness.

“Bargs” drove for WPS Racing when Evers was the Team Manager for the Queensland-based team and has donated an original personal helmet from that period of his career for the auction.

“News like this is never good, but when it happens to someone you know and a terrific guy like Keith, then it hits you even more,” said Bargwanna, who drives the Rock Commodore for Kelly Racing.

“I think this is a chance for the sport and the fans to dig deep and do what we can.”

Bargwanna is one of dozens of teams and drivers who will be donating items for the memorabilia store and auction. A full list of the all the items will be made later in the week.

Orrcon Steel are renowned for the best hospitality in the business and are offering up two three-day corporate tickets for the Telstra Sydney 400 at Homebush in December. This includes flights from Melbourne or Sydney and three nights accommodation, as well as a personal meeting with Steve Richards and Mark Winterbottom, a tour through the Ford Peformance Racing pit area and a team merchandise pack.

Borland Racing has donated a full Formula Ford test and evaluation day at Winton Raceway in North East Victoria in August or September in a 2010 Spectrum. You just need to get yourself there and be prepared to pay for any crash damage.

This is a rare piece of history. An actual race helmet from Will Power’s 2006 racing season with Team Australia at Walker Racing. The visor will be signed by Power with any message you want.

You can be a part of the Miss V8 Supercars swimwear judging panel at Queensland Raceway on Sunday, May 2. Includes a signed poster and a group photograph with all the contestants.

One of the “left of field” pieces in the Keith Evers auction will be a personally-signed print celebrating Australia’s first Winter Olympic gold medal won by Steven Bradbury in Salt Lake City in 2002. He will be on hand to present it.

A unique, six-foot tall teddy bear sporting a V8 Supercar tee-shirt which has been signed by all 29 drivers in the 2010 V8 Supercar Championship Series.

A pair of signed Marcos Ambrose gloves as worn by the ‘Tassie Devil’ in the 2010 NASCAR Sprint Cup Series race at Auto Club Speedway in Fontana, California. Signed and framed.

Bargwanna spent the 2006 and 2007 V8 Supercar seasons with WPS Racing and has donated one of his original race helmets from his time with the team for the auction.

TeamVodafone raced with a unique pink livery at the 2009 Sydney Telstra 500 in support of the McGarth Foundation – you can buy the damaged left pink guard from the car. It has been signed by Craig Lowndes.

A hot lap with either Craig or Jamie Whincup at Queensland Raceway on October 28th at the team’s annual ride day. The package also includes lunch and a signed commemorative photo from the ride day.

You can either strap in alongside Alex Davison in the Irwin Falcon at his home test track at Queensland Raceway on December 13 at the team’s ride day, on July 27 at Eastern Creek or on July 29 at Calder Park. This includes a team merchandise pack.

The original 2009 suit of Jim Beam Racing’s Steven Johnson from one of his best seasons in the sport Including images of both car and driver for future framing.

The original 2009 suit of Jim Beam Racing’s James Courtney. This is the suit in which he won last year’s inaugural Townsville event. Including images of both car and driver for future framing.

The lucky bidder will get a hot lap with ‘Frosty’ in the #5 Orrcon FG Falcon at either Winton on July 27 or Phillip Island on September 14, as well as a team merchandise pack.

One lucky bidder will get to take a piece of Richo home – well, something that was part of him in 2008! A signed, Castrol Edge/FPR race suit. Comes with car and driver images for future signing.