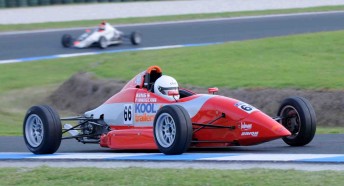 Victorian racer Jesse Fenech will make his national Formula Ford Championship debut at Round 3 at Winton in three weeks time.

Fenech will enter his privately-entered Kool Trailers Spectrum at Winton after competing in the Victorian State series for the past two years.

He said that stepping up to the national title is another way to test his ability against the best in the country.

“I have raced well at Winton before and have completed countless laps in testing so I am confident I will be pushing the pace along,” said Fenech.

Fenech will complete a test at Winton with his Borland Racing Development team prior to the event.

His Winton entry comes after a successful hit out in last weekend’s Victorian State Racing Championship meeting at Phillip Island where he qualified on pole in his Spectrum and took two race wins.

While Fenech waits for the Winton round, his rivals will contest the third round of the Genuine Ford Parts Australian Formula Ford Championship this weekend at Queensland Raceway.

Below is a complete entry list for the event.