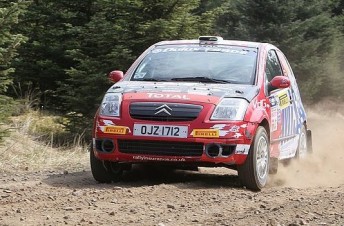 21-year-old Molly Taylor has recovered from a tough opening leg to put in a great performance during the second day of the Pirelli International Rally; the second round of the British Rally Championship.

Competing in the Citroen Racing Trophy section of the Cumbrian-based rally, Taylor beached her C2 on a corner in heavy dust during the opening leg and was forced to restart the event on the second day under the ’super rally’ rules.

Over the day’s eight stages, the Sydney-sider was consistently amongst the top two Citroen drivers and she finished the event with a fastest stage time (10th fastest outright), proving again that she has the speed to match it with her more experienced opponents.

“It’s been an up and down weekend but we are really happy to get on the pace and gain confidence with the car,” said Taylor.

“Now I just need to work on refining the pace!  I have never had such a challenging and enjoyable rally.  The stages were really, really tricky, the roads were really fast and narrow with lots of fifth gear corners over crests that required complete commitment.

“I’ve never had such a buzz. The Citroen is such a great car to drive.

“We were disappointed to have to ‘super rally’ which spoilt the overall event result, but the main goal for the weekend was to set better stage times, so I’m really happy with that.”

The next event for Taylor is the Jim Clark International Rally on May 28 and 29.