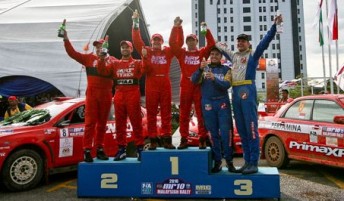 Japan’s Katsu Taguchi and Brisbane-based co-driver Mark Stacey in a Mitsubishi Lancer EVO X have won a dramatic Malaysian Rally, the opening round of the Asia Pacific Rally Championship.

Overnight leader, Perth-based Scotsman Alister McRae and fellow West Australian co-driver Bill Hayes in a Proton Neo S2000 held a 27-second lead over Taguchi. However a heavy landing at the end of Stage 10; six stages from the finish, left his Proton with a damaged radiator and he was forced into retirement.

“Accidents do happen in rallying and it can cost you the race,” said Taguchi.

“It has happened to me before. Today is my day I suppose. But to be honest I must admit that Alister has a very fast car and for me to close the gap would have been quite difficult.

“What’s more all of us have to face up to a very tricky venue with plenty of challenges, especially the condition of the track.”

In fact there was no happy ending for the Proton R3 team. Things were looking up until McRae’s mishap and the problems suffered by their other entrant, Chris Atkinson and Stephane Prevot with their electrical failure to their car.

“You can have a perfect day and then you pray everything will be fine the next. But sometimes it doesn’t work out that way.”

The next round of the Asia Pacific Rally Championship is the Rally Hokkaido in Japan on 22nd-23rd May.