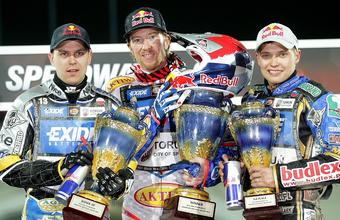 The Aussie tore from the tapes to win a re-run final ahead of local favourite Jaroslaw Hampel and Russian star Emil Sayfutdinov.

Crump was unsure whether he would start the 2010 season after suffering severe burns and broken bones in a crash at Belle Vue (UK) last September, which nearly cost him the 2009 championship.

But the 34-year-old declared himself fit to race in Leszno and cruised into the semi-finals with 10 points from his five heats.

He then led a determined Sayfutdinov home to reach the final, before producing a classy tapes-to-flag triumph to top the rostrum.

“I didn’t expect to be here today, so it was a bit of a bonus really,” said Crump.

“At the end of last season, I thought I would be able to start defending the World Championship in about June if I was lucky.

“So it’s a big bonus to be here at the start of the season and an even bigger bonus to get into the final.

“I’ve always put a little bit of pressure on myself to be the world champion, and I want to try and win again.

“But this year is a little bit different because it was only two months ago that I decided I would start.”

Hampel, who made his SGP return after a two-year absence, also kicked off his season with a bang. He topped the heat scorecharts with 11 points, before pushing the Aussie all the way in the final.

Third-placed Sayfutdinov bagged 10 points in his heats, but was unable to keep up with Crump and Hampel from the tapes in the decider.

Three-time world champion Nicki Pedersen will have been disappointed with his start to the campaign after scraping through to the final with eight points, before missing out behind Crump and Sayfutdinov.

Kenneth Bjerre (10), Rune Holta (9) and Chris Harris (8) made positive starts to their SGP seasons. But Freddie Lindgren, Hans Andersen and Chris Holder will have been gutted to miss the semi-final cut on countback, despite scoring eight points apiece.

The next round of the Speedway Grand Prix Series is at the 43,000 seat Ullevi Stadium in Gothenburg (Sweden) on 8 May.