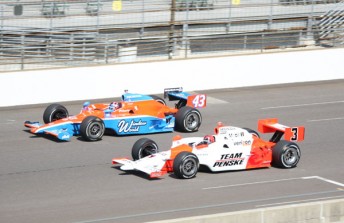 Indy Racing League and Indianapolis Motor Speedway officials have released the provisional entry list for the 2010 Indianapoils 500 this May.

The list reveals 40 entries vying for the 33 starting spots, with six entries yet to nominate a driver.

Of the vacancies, Jacques Lazier is favourite for the third seat at AJ Foyt Enterprises, Ana Beatriz could figure in the running for the fourth and final seat and Dreyer & Reinbold Racing, Graham Rahal for the slot at Rahal Letterman Racing and JR Hilderbrand for the AFS Racing seat.

Team representatives from Newman Haas Lanigan Racing have also moved swiftly to have that team’s reference reverted back to the original Newman Haas Racing moniker, suggesting that Mike Lanigan has divested his interest from that once-great team.