Villeneuve will be one of the fastest: PD

Villeneuve will be one of the fastest: PD 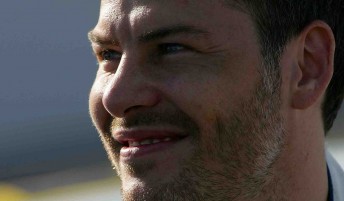 The Bottle-O Racing’s Paul Dumbrell says that his star co-driver Jacques Villeneuve will be one of the fastest international drivers at the Armor All Gold Coast 600 at Surfers Paradise in October.

At tonight’s announcement, Dumbrell was wide-eyed in the thoughts of sharing his Ford Falcon FG with the French-Canadian, who is considered the Gold Coast race’s biggest international draw card.

Villeneuve won the 1995 Indianapolis 500 before switching to Formula One and winning the 1997 World Championship. Villeneuve is set to be given plenty of laps in the Bottle-O Falcon prior to the race meeting to get comfortable with his surroundings. Each international driver will be given a special test session at Queensland Raceway on the Wednesday leading into the meeting, however, his FPR-run team is likely to bring out the 1997 F1 champ for a test at Winton.

Dumbrell told Speedcafe.com.au that Villeneuve will be on the pace in his V8 Supercar within a matter of laps.

“I reckon give him half day or a day testing the car, he’ll be right up to speed,” Dumbrell said.

“He’s done a fair few miles in NASCAR of late, so I can’t see why he would struggle in anyway. He’ll be on the pace very quickly. He’s done a bit of running in tin-tops in recent times, and from all reports, he’s been fast, as you would expect. I can’t see this being any different.

“We’ll work on his schedule and when we can fit him in for a test. Ideally, we’d love him to come out and do some miles in the car at our test track at Winton, but it will be up to his timetable and what he’s got on.”

Dumbrell says that it will be an “amazing experience” racing with Villeneuve.

“It’s pretty incredible. For a guy who has won on both continents – Formula One and IndyCar – to come out here is amazing,” he said.

“I grew up watching him win the Formula One World Championship in 1997. I used to stay up late and watch it with Will Davison (Toll HRT V8 Supercars driver). Now, a few years later, I get to race with him. It’s going to be an amazing experience.”

Villeneueve was meant to be one of the special guests at the launch of the Armor All Gold Coast 600 tonight, but was stuck in Europe due to the volcano eruption in Iceland.

Dumbrell says that the Armor All Gold Coast 600 will be a “must see” race.

“When I first heard about the race meeting, I was a little concerned, but now that more information has come out and the calibre of drivers, it’s definitely going to be a ‘must see’ race,” he said.

“We know that people always came to the Gold Coast to see the V8s, and the IndyCars were a good side attraction in the past. Now, we’ve been able to combine the two with some of the best international drivers racing with us in the V8 Series. I reckon the punters will love it. There’s no doubt they’ll be plenty of action.”