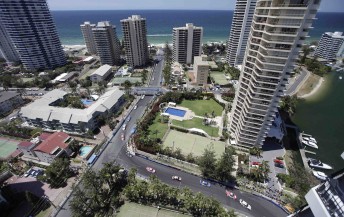 The much-anticipated list of international drivers competing in the Armor All Gold Coast 600 has been confirmed tonight at the Great Lawn of the Broadwater Parklands on the Gold Coast.

Eighteen star drivers from 12 different countries will be represented on the grid, all driving V8 Supercars.

The unique two-driver per-car Gold Coast 600 rules will see each two-car team get one international driver. The team will place that driver with one of its regulars, while the second car will be driven by the team’s other regular driver and another driver (selected at the team’s discretion).

Every single car outfit will be required to run its international driver.

Most of the V8 teams signed the overseas drivers themselves, while others were placed there by event organisers.

The international stars will be given a special test day at Queensland Raceway on the Wednesday leading into the meeting (October 20) to get acquitted with the foreign race machinery.

An extended practice session will also be given international drivers on Friday at the track to ensure that the drivers are up to speed for the twin-300km races on Saturday and Sunday.

Below is the confirmed list of international drivers and teams that they will compete with at the famous Gold Coast street race.