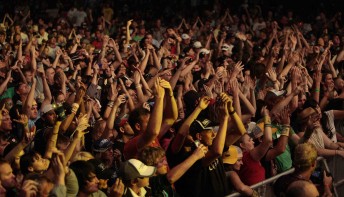 The launch of the all-new three-day SuperCarnivale was launched tonight – and it’s not just the racing fans who are the big winners.

They will perform Friday, Saturday and Sunday nights in a massive line-up of Australian and international artists just 600m from the circuit precinct.

The feature international Act will be announced in late May.

People can access the entire weekend including the racing, on-track entertainment and every concert for as little as $136 (full ticket prices listed below).

The Armor All Gold Coast 600 will be the official name of the V8 Supercar Championship Series component as part of the SuperCarnivale which will take in the 18 international drivers and 16 Artists that will play across three big nights at Broadwater Parklands, as well as massively reduced ticket prices compared to last year.

The emphasis on families has meant a total redesign of the circuit, cheaper and more grandstand seat options, with most covered, the clearing out of Macintosh Island Park for all new family and alcohol free zones, new general admission areas and easier access around the circuit.

“Because of the world-wide reputation of V8 Supercars these international drivers want to come to the Gold Coast to co-drive with our home-grown Champions such as Craig Lowndes, Jamie Whincup and Garth Tander – drivers who can mix it with the best in the world,” said Queensland Premier Anna Bligh.

“They will take part in the Armor All Gold Coast 600; however, the Gold Coast Supercarnivale is more than just a car race. There will be a huge range of on and off track activities for families, race goers and spectators at this totally refreshed event.

“Most ticket prices will be substantially reduced with the Gold Coast Bulletin offering coupons to allow free entry for children 12 and under, so long as they are accompanied by a paying adult.

“With a new format and different attractions, the Gold Coast SuperCarnivale will be a huge motor-racing and tourism drawcard for the region.

“In fact, it’s estimated that more than $60 milllion will be injected into the Queensland economy and more than 500 jobs will be created.”

V8 Supercars Chairman Tony Cochrane said he was ecstatic with the launch of the new Armor All Gold Coast 600 which will feature some of the biggest names in the sporting world from 12 different countries.

“A SuperCarnivale of entertainment, the event will be headlined by the Armor All Gold Coast 600 in their third endurance event for the season, pairing with 18 international drivers (one per team) across two 300km races over the three day event,” said Cochrane.

“Combining racing with entertainment, the Rock’n’Race format that has proved so popular at other events such as the Sydney Telstra 500 and the Clipsal 500 will be an integral part of the Gold Coast race, with the Broadwater Parklands precinct to host concerts for up to 35,000 same day event patrons each night of the event.

“Admission to the concerts is free with a same day event ticket, as will be all of the on-track entertainment and plenty of other racing from the best Australian support categories.

“With the new look launched tonight we also welcome Armor All as naming rights sponsors in a four-year extension to their already extensive involvement in our Championship.”

The massive concert lineup includes some of the best acts from all genres performing across three nights at the Broadwater Parklands. These include:

–  Empire of the Sun

–  Ian Carey from the Ministry of Sound

–  As well as local DJs kicking off each night

The feature international Artist will be announced in late May with more Artists still in discussions.