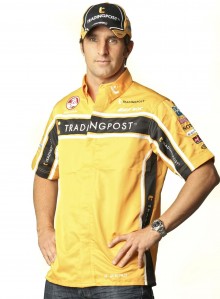 Matt Halliday will team with Jason Bright in the V8 Supercars endurance races in the Trading Post Racing Commodore VE.

The New Zealand Porsche specialist will team up with Bright in the #14 car in what will be a reunification of sorts. The pair has driven in the same team on two occassions – but never together. Halliday drove with Ford Performance Racing in 2006, and then joined Bright’s own V8 team back in 2008, partnering Marcus Marshall.

Halliday currently competes in the Porsche Supercup and is running 11th in that championship. He will return to Phillip Island (L&H 500) and Bathurst 1000, but there is no confirmation yet if he will compete on the Gold Coast streets.

The Kiwi said that he couldn’t think of a better guy to be partnered with for endurance races.

“I’ve driven in the same team as Jason [Bright] when we were at FPR together and in his team after that so I know Jason really well,” he said.

“He is one of those guys who have succeeded internationally not just V8s so he is a really good guy to be involved with. There’s no one I would prefer to be with actually.

“I have a really busy schedule of racing all over the world this year but the enduros are two of the best races in the world and the interest in them from drivers is very high. I had a date clash last year and it was quite painful missing out so it was high on my list of priorities to sign a good deal this year.

“I get the feeling already that BJR is a really tight knit team. As far as Bathurst is concerned, BJR has had a strong run there for the last few years and we’re going there to try and win it.”

Bright was pleased to have Halliday back in his corner.

“Matt did a good job for us in 2008 and I thought that he did a good job at FPR. He’s got some good experience in V8s in good cars and has been to Bathurst a few times. He’s been quick and he didn’t require a lot of laps to do it,” he said.

“I get the feeling already that BJR is a really tight knit team. As far as Bathurst is concerned, BJR has had a strong run there for the last few years and we’re going there to try and win it.”