Buy a piece of Ambrose history and help a mate

Buy a piece of Ambrose history and help a mate 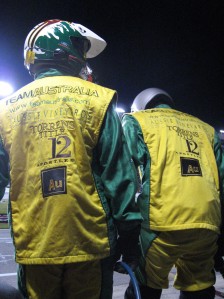 Marcos Ambrose fans have just one more day to purchase a true piece of their favourite driver’s racing history and support a great cause at the same time.

The Australian motorsport industry has come together to help “one of its own” with a major fund raising event at round five of the V8 Supercar Championship Series at Queensland Raceway on Saturday May 1.

He will under go chemotherapy at the Gold Coast Hospital for the next three weeks, before another assessment is made on the next phase of his treatment.

There is also a pre-event auction on E-bay being linked through Speedcafe.com.au which is where a Team Australia crew suit jacket from Ambrose’s milestone first season in the 2006 NASCAR Craftsman Truck Series is being offered.

It is signed by the two-time V8 Supercar champion from his very first season of racing in the United States and comes with both driver and truck images from that season for framing.

The jacket has been donated from the private collection of Ambrose’s former Media Manager, Brett Murray.

“There are not too many of these jackets around and it is certainly a unique piece of my racing history to date,” said Ambrose.

“I hope my fans bid long and hard on this piece so we can get as much cash in the door as possible for Keith.”

The E-Bay item can be viewed by Clicking Here and the live auction finishes tomorrow at 11:51am AEST.

Evers lives on the Gold Coast with his wife Karen and twin eight-old children and is unlikely to rejoin the workforce for at least another six months.

Evers has a long history in V8 Supercar racing and Australian and international motorsport in general. His most recent role was as Team Manager with Inta Racing before financial issues forced his team owner out of the sport.