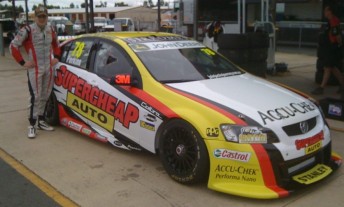 Jack Perkins has shaken down his Supercheap Auto Racing-backed Holden Commodore VE at Queensland Raceway today ahead of his return to the Fujitsu V8 Series at Ipswich next weekend.

Perkins completed 25 laps around the ‘Paperclip’ before wet weather saw the day called off early.

After contesting the entire V8 Supercars Championship Series with first-year team Kelly Racing last year, and starting this season in the Aussie Racing Cars Series, Perkins was pleased to get back behind the wheel of a V8 race car.

“The rain was a bit of a drama. When we first got there the morning it was wet so we did about 25 laps as soon as we could before it rained again. It was a bit of a pain, but it’s all good, we did the minimum that we needed,” he said.

“I moved to Queensland thinking it would be dry and test days wouldn’t be rained out – but i’ve been proven wrong!

“The guys at PMM did a good job helping me get the car ready for the day. I had Tim Slade helping me run the car. ‘Slade Dog’ was my crew chief!

“The car felt pretty good. It was shame we didn’t get much running in the dry. It was good to have a bit of a systems check.”

The car that Perkins will drive is the same chassis that Slade used in last year’s Championship Series, driving for Paul Morris Motorsport. The Commodore is owned by James Rosenberg and set the lap record in Saturday’s race at Queensland Raceway, only to be beaten by his team-mate Russell Ingall on Sunday.

“The car is a proven racer. It’s definitely a different car to what I’ve driven in the past,” Perkins said.

“I think once we get some good tyres on it in race conditions, it should be pretty good. I don’t want to set the expectations too high, because there are some good guys out there like your Moffats, Owens and the guys who run the full-time. They are right in touch with their machinery.

“I was a bit rusty when I first jumped in, but it will be good to just have a good solid result and see if we can try and get to the next round at Winton. I think that will be a bit easier for me, being my old test track.”