Is Garry Rogers the best talent finder in V8s?

Is Garry Rogers the best talent finder in V8s? 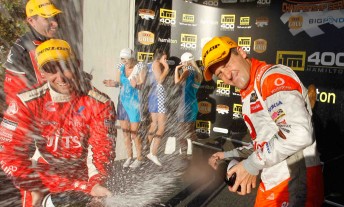 All three drivers on the podium in Race 8 of the V8 Supercars Championship Series – Jamie Whincup, Garth Tander and Michael Caruso – did their V8 apprenticeship with Garry Rogers Motorsport .

Rogers is renowned for giving young blokes a chance in the big V8 league. Some of them have seen their careers prosper, while some have seen them stall.

Besides Whincup, Tander and Caruso, you can add to that list Steven Richards, Jason Bright, Jason Bargwanna, Andrew Jones and Lee Holdsworth who all got their first genuine chance in the V8 Supercars Series with his team – and that’s not counting first-time endurance drivers.

All of those drivers listed (bar Jones) are currently full-time drivers in the championship and have racked up an impressive nine Bathurst 1000 wins between them.

So, is Garry Rogers the best driver talent scout in the business?

“I just judge people the way I feel, and if it turns out that it ends well, then good luck,” Rogers told Speedcafe.com.au.

“I think if you look at the guys who finished on the podium at Hamilton, you have to say they have all been good in what they do.”

Both Tander and Whincup started their careers with Rogers – but ended with different outcomes. Tander stayed in his team for six years, moved to the factory Holden fold in 2005 and won the championship in 2007. Whincup, on the other hand, was unceremoniously flung from GRM, but has since gone on to be the dominant driver of the past two seasons.

Does Rogers think that his current drivers – Lee Holdsworth and Caruso – can win a championship down the track?

“I wouldn’t have Michael or Lee in my team now if I didn’t think they could win the V8 Championship,” he said.

“I’ve made a couple of blues on the way through, but most of the guys we’ve had in the team have worked out OK.”

The V8 Supercars Championship Series heads to Queensland Raceway in less than two weeks (April 30-May 2) for the next event on the schedule. In recent years, it’s a track that GRM has struggled at.

“We won a couple of times there with Tander, and I think Bargs (Bargwanna) has done quite well there with us too,” he said.

“But in recent times, we have struggled a bit, We’ll work hard to sort our cars and lets hope that Hamilton is a sign that we are getting better with the cars and we can follow up with a similar result.”

Team driver Caruso, who picked up his third-career V8 podium at Hamilton last weekend, said that the focus for the Fujitsu Racing team will be to get the most out of the car at the tracks that they’ve traditionally been slower at.

“I know what we do need to do to our car to get faster, and it’s one thing that we’re working on,” Caruso said.

“There are certain tracks that we are working well at, but we do need to work on tracks like Queensland Raceway where we do struggle a bit – Phillip Island too. We’re a bit behind the eight-ball there.

“Those little things that we are trying to do behind the scenes won’t come into play until the end of the season.”