Morris: Beat me and I’ll give you a test

Morris: Beat me and I’ll give you a test If you don’t have a deal for the endurance races and your competing in the Fujitsu V8 Supercars Series, make sure you beat Paul Morris – because he will give you a test drive in one of his Commodore V8 Supercars.

The scheming team owner has decided to suit up at Queensland Raceway in the Development Series, driving the Commodore that he raced in the first round of the V8 Series in Abu Dhabi where he replaced the absent Greg Murphy.

And if anyone can beat him at the Ipswich track, he’ll give them a test – and maybe an endurance drive … 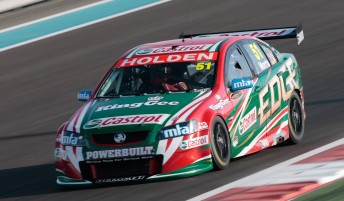 Paul Morris drove the #51 Castrol Commodore at Abu Dhabi this year, replacing Greg Murphy due to the Kiwi's clashing commitments

“If anyone can beat an old alcoholic with a racing habit, they’ll deserve it,” he said.

“I’m going there as a yard to stick to measure the talent in the field. I’ve raced in plenty of Fujitsu Series races in the past and a few of them have had a bit of a whinge at me – I can tell you, that’s not going to get them a test!

“Anyone who beats me will get to drive one of my cars and be considered for the endurance races. I’ll step out and give a young bloke a go, if they’re tough enough.

“In fact, we still don’t have our driver signed yet. There’s still a spot open. The best way to look at it is from the driver’s seat – think of me as a roaming talent scout!”

As it stands for the endurance races, Morris will partner Russell Ingall (Supercheap Auto Racing) and Frenchman Yvan Muller will drive with Greg Murphy (Castrol Edge Racing), but Muller’s drive is still in question due to a potential scheduling clash that is yet to be resolved in the World Touring Car Championship – the category that Muller races in.

So, who knows, a star could be born at Queensland Raceway (April 30-May 2). Who could win it? Two young drivers stand out as a big chance of securing the prize – Tim Blanchard and Ant Pedersen. The pair is currently locked in equal third place in the Fujitsu Series and both displayed impressive form on the streets of Adelaide last month.