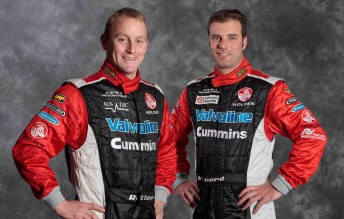 There will be a lot of drivers at the next two events of the V8 Supercars Championship Series at Queensland Raceway and Winton Motor Raceway.

Both events will see rookie and endurance drivers steer cars in the first two practice sessions at each circuit on Friday.

Practice rules prohibit the drivers in the top 15 in the championship from participating in those two practice sessions, however, the rookie and endurance session gives front-running teams an opportunity to give their Phillip Island and Bathurst drivers some pre-endurance race laps. And the laps are considered even more valuable now thanks to the new-for-2010 rule where regular team drivers can’t pair up in the same car.

Almost all of the teams will give their endurance drivers miles, save for a couple of international drivers.

TeamVodafone will strap in Steve Owen and Mark Skaife on the Friday, while Walkinshaw Racing will give Cameron McConville, Craig Baird and David Reynolds seat time in its Holdens.

Both of Garry Rogers Motorsport’s Commodores are running in the top 10 in the championship, leaving Lee Holdsworth and Michael Caruso a chance to vacate their rides for endurance men David Besnard and Greg Ritter. While not confirmed, it’s expected that Besnard will drive with Holdsworth and Ritter with Caruso.

“Our mission at the moment is to win every race we possibly can,” he said.

“Fortunately with the guys that we have, they’ve got a lot of experience that we can use at those tracks.”

Ford Performance Racing will give laps to James Moffat, Luke Youlden and Dean Canto and Dick Johnson Racing has pencilled in time for Marcus Marshall, Warren Luff and David Russell.

In the Kelly Racing camp, no drivers have been confirmed to date for the team’s four cars for the 2010 season of endurance, although a notable face in the garage over the Hamilton weekend was Kiwi driver Jonny Reid.

The former open-wheel star recently tested a Kelly Commodore at Winton at the team’s driver evaluation day and is in talks with the team for a ride in one of the operation’s cars for the enduros.

Shane Price will drive the Centaur Racing Commodore he’ll share with Tony D’Alberto in Queensland, and some teams outside the top 15 will also give their co-drivers laps, including Dean Fiore, who will hand over his Ford Falcon FG to his co-driver Michael Patrizi.

Other drivers may be seen in the session, with some of the final seats set to be announced soon. One example of that is Jack Perkins, who is expected to be confirmed as Tim Slade’s partner in the Wilson Security Racing Falcon FG.