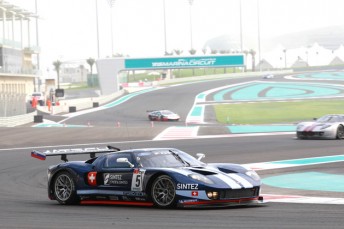 Formula One refugee Romain Grosjean has stamped his authority on the inaugural GT1 World Championship, taking a convincing win at the opening round in Abu Dhabi with co-driver Thomas Mutsch.

Starting from pole in the feature, Mutsch handed the Matech Ford over to Grosjean at half distance, with the Swiss emerging in the lead – narrowly ahead of Marc Hennerici in the lead Phoenix Chevrolet. Grosjean then proceeded to pull away at up to two seconds a lap, eventually winning by some 20 seconds. 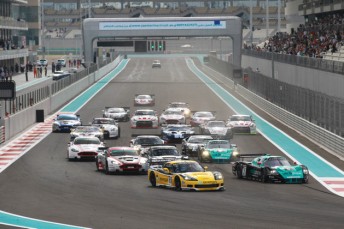 The start of the inaugural FIA GT1 World Championship

“I knew I had to push in the first two or three laps of my stint and that is what I did. Then I could do my race without any traffic or trouble or mechanical problems.”

Hennerici’s stint in the feature came on used tyres, after the team had elected for Zuber to run their fresh rubber early in the race.

“We had a perfect strategy,” insisted Hennerici, despite the loss.

Earlier in the day, Hennerici and co-driver Andreas Zuber won the qualifying race, with Mutsch taking the flag second – after Grosjean had driven from eleventh on the grid to second in the opening stint.

The Corvette drivers were denied their right to start from pole position for the main race however, due to incorrect ballast positioning on all of the C6.Rs resulting in a 10 place grid penalty.

Despite the setback, the Phoenix Corvette squad ended the weekend on top of the teams championship, after their cars came home second (Hennerici/Zuber) and third (Mike Hezemans/Andrea Piccini) in the feature. The latter had impressively forced their way through from last on the grid.

The lead Vitaphone Maserati of Andrea Bertolini and Michael Bartels finished the feature in fourth, ahead of the Riccardo Zonta/Rafael Daniel Reiter Lamborghini. Sixth was Miguel Ramos/Enrique Bernoldi, with the second of the Vitaphone cars recovering from a spin at the opening corner of the qualifying race, caused by contact with Hennerici.

While ending with a victory, the weekend started horribly for the Matech Ford team, with Natacha Gachnang suffering a 270km/h crash in the No.6 car during qualifying. Gachnang sustained a broken leg in the accident, which led to the session being abandoned just a third of the way through.

The crash was later blamed on a combination of mechanical failure and driver error – with the team reporting a hydraulic issue caused Gachnang to apply more braking force than normal, inadvertently collecting the accelerator in the process.

The championship continues at Silverstone in two weeks time.