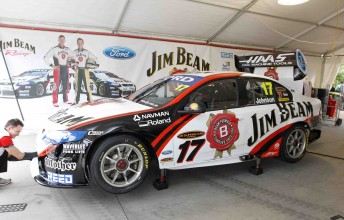 A brake irregularity has seen three Ford Falcons excluded from the Race 8 results at the ITM Hamilton 400 in New Zealand.

Jim Beam Racing’s Steve Johnson, Orrcon Steel FPR’s Mark Winterbotoom and Dunlop Super Dealers FPR’s Steven Richards have all been disqualified due to a rear brake rotor issue where the rotors were placed on the wrong side of the car.

Before the stewards decision was made official, Speedcafe.com.au spoke to a disappointed Johnson, who wouldn’t go into detail about the infringment, but said “It kind of sums up our year …”

Points-wise, the effect on Winterbottom and Richards won’t be felt as much as they finished down in 14th and 15th, but team principal Tim Edwards was still upset at the error.

“Even though it was a mistake, the rules need to be obeyed,” he said.

“It was a mistake. We’ll go away and we’ll put better processes in place to make sure it won’t happen again. It’s not as though they were an illegal rotor – they were simply on the wrong side of the car. We’ll address it and make sure it doesn’t happen again, but we’ve got a lot of work to do to find some speed.”