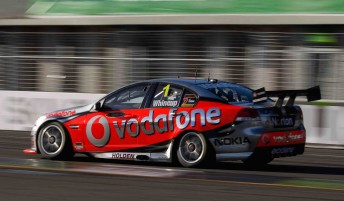 Jamie Whincup has scored pole for Race 7 at Hamilton

There have been seven qualifying sessions in this year’s V8 Supercars Championship Series, and in five of those races, TeamVodafone’s Jamie Whincup has ended the session on pole position.

Whincup nailed his shootout lap for Race 7 of the V8 Supercars Championship Series at the ITM Hamilton 400, putting in a blistering second sector to secure the top spot.

“Garth’s been quick all day. We knew we had it there, but it was a matter of getting it right at the right time. But like all pole’s there’s no use getting too carried away – it’s the race we want.”

Toll HRT’s Garth Tander, the man who has dominated the first part of the weekend, will start Race 7 of the V8 Series from the outside of the front row – simply not good enough to beat the championship leader.

Fujitsu Racing’s Michael Caruso will start third in his best-ever qualifying performance ahead of TeamVodafone’s Craig Lowndes who leaped from provisional 10th to fourth.

Jim Beam Racing had a mixed session. Steven Johnson will start fifth while James Courtney overshot the first corner and ended up ninth, just ahead of a disappointing Mark Winterbottom in the Orrcon Steel FPR Falcon.

Local lad Fabian Coulthard was fast in the two first sectors but couldn’t get the job done in the last sector and ended up sixth ahead of Jack Daniel’s Racing’s Rick Kelly.

Centaur Racing’s Tony D’Alberto was the biggest loser of the session, dropping from third to eighth, however, it was his best ever qualifying position ever.