Tander on provisional pole in Hamilton

Tander on provisional pole in Hamilton 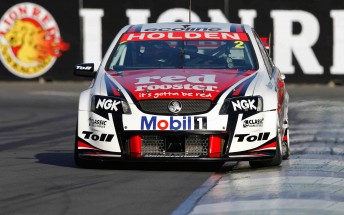 Garth Tander is on provisional pole for the first Hamilton V8 race. Top 10 shootout will run at 11.30am NZ time

Garth Tander has continued his solid run in Hamilton this morning, taking provisional pole for Race 7 of the V8 Supercars Championship Series at the ITM Hamilton 400 in New Zealand.

The session was stopped twice, first due to an incident involving Stratco Racing’s Tony Ricciardello, followed by another stoppage when Will Davison cloated the wall and Andrew Thompson run up an escape road.

TeamVodafone’s Jamie Whincup was fourth from Fujitsu Racing’s Michael Caruso and the best of the local drivers Fabian Coulthard (Bundaberg Red Racing). On the flipside, fellow Kiwi Shane van Gisbergen had a shocker and will start the race from 21st.